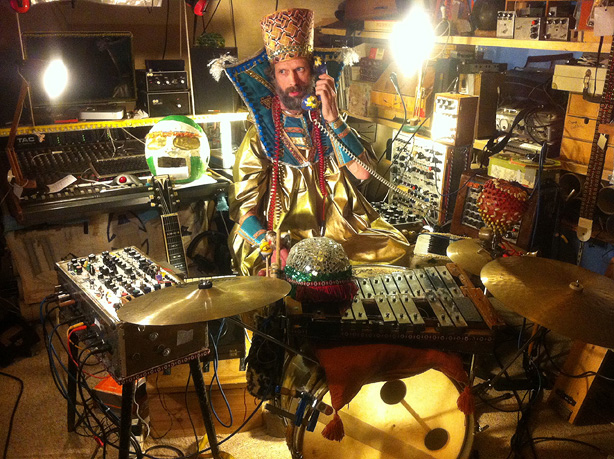 We are delighted to announce that Mancunian musical maverick Paddy Steer of Homelife (Ninja Tune) will be paying a visit to the Kingdom next month as part of his upcoming mini tour of Ireland.

Paddy Steer is a Zelig-like character along the timeline of Manchester’s musical activity. It’s a testament to his musicality that he has played with such a wide range of music and artists over the years, be it as a bass player, drummer, Hawaiian guitarist etc. or all these roles at the same time.

In rejection of the notion of ‘immaculate reproduction’, live performances from Paddy’s own project err more daringly and admirably on the frontier of chaotic abstraction, expression and focussed blunder, dice rolling down the hill in case of duende, as from behind his stacked array of instruments, the anarchically intrepid punk gargles through a vocoder with his xylophone, all a-clatter under disco lights and doilies.

He creates his tools, as he creates his craft, here from scratch, there from new, ever from long-garnered experience that includes running the massive ensemble Homelife, years hence. In style he is unique on the circuit that knows him, on which similarly his blinkered resolve and capacity to create must be unparalleled.

This has been reduced down over a long period of time, and applied coat by coat with subtle mastery, for richness, depth, and vivid texture, as if it were some magnificent curry, or a samurai sword. Lounge, romp, deep groove, homely and galactic-expedition whimsy, furry electronic invention, it feels akin to playing and winning a computer game made from reality, to hear.

Sounds like a Swiss cuckoo clock made of egg boxes and horsehair, glued together by an African Moog player in a Vietnamese iron monger’s shop

For an insight into the wonderful mind of Mr. Steer grab a cuppa and watch this video